We are all tempted to make our job easier sometimes – especially when deadlines, exam period and thesis defence are looming. But, even if we get away with this now, it might happen that in ten or twenty years we will be in a position that will cause someone to inspect our academic work again. And everything will come out to light. In fact, this has happened to many public figures.

The defence of the Minister of Defence

Perhaps the most well-known foreign plagiarised work is the dissertation thesis of the former German Minister of Defence. He was writing it at a time when he was already a politician and under a lot of work-related pressure. In 2007, he defended his thesis with the highest marks and obtained a Doctor of Law degree. A routine check in 2011 revealed over eighty copied passages in more than one hundred pages of his work.

Initially, the accused Minister of Defence denied cheating and only admitted to mistakes in the annotations, which he apologised for. However, it was soon proven that he committed plagiarism and he lost his degree. A month later, he resigned from his ministerial office as well as other posts. His prosecution for copyright law violations was discontinued after he paid twenty thousand Euros to charities. That is because no serious breach of third-party rights had been committed.

A Minister who lasted thirteen days

In our country, plagiarism in the political sphere was discussed in 2018. An analysis of a master’s thesis on child arrangements during divorce, which a former Minister of Justice defended in 2011, proved similar to another thesis, a book and other online sources. The author copied entire passages of text without referring to their source, sometimes paraphrasing them. She also kept the same grammatical mistakes.

Consequently, her other thesis on the topic of rabbit breeding which was defended at a different university, was also analysed. It transpired that sixteen out of forty-eight pages were copied from another work. These were, again, unreferenced. As a result of the criticism from the professional community, the Minister of Justice resigned after just thirteen days in office.

Free time of the Minister of Labour

In the same year, plagiarism was exposed committed by a former Minister of Labour and Social Affairs. An analysis of his bachelor thesis Youth and Free Time from 2007 found similarity in almost forty o ut of sixty-five pages. Passages were copied including grammatical mistakes, formatting and typos.

He defended his diploma thesis, Free Time of Adults, two years later. It consisted mainly of the text of his bachelor’s thesis, only with the words ‘children and youth’ replaced with the word ‘adults’. He extended this work by twenty-four pages, which again included copied passages with no direct citations. He, too, resigned from his ministerial office after the analysis of his bachelor’s thesis was published, and he gave up his political posts. 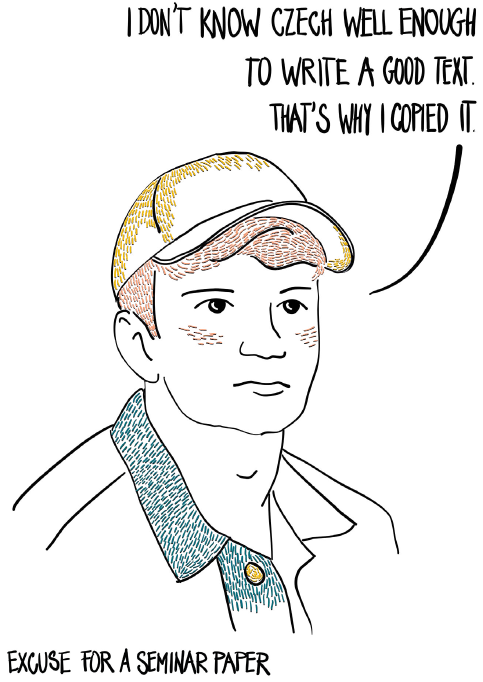 What lesson can we learn from this?

There are many cases where obtaining an academic degree with th e help of plagiarism was proven. In most of them, plagiarism was only suspected several years after they were written. Specifically, suspicion arose when the work was published, they were analysed with improved tools for checking text originality, or the author assumed an important public office.

The authors rarely admit the truth. At first, they defend themselves with their successful thesis defence or the approval of their s upervisor, or they play down their plagiarism as a small technical omission. After the evidence and the copied passages of text are exposed, they must resign from their office due to public pressure, and they may also lose their academic degree.

It is definitely correct to require moral and academic integrity from those who participate in a state’s leadership, who hold important posts, and distribute financial resources. Let us require the same from ourselves. The knowledge that we will not be facing accusations in a couple of years which might end our career and cost us our credibility is invaluable. After all, this is what fairy tales teach us: we shouldn’t cheat, and the past will always catch up with us.